Watch Our Video Request an Appointment 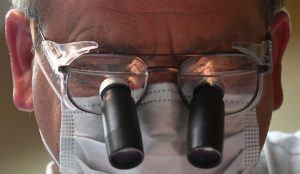 Some might find hardship and endurance trips uncomfortable, but the combination makes Dr. Kent Willett happy.

Willett, 65, is one of the practicing dentists at Willett Dental Associates in Columbia. He combines his profession and his passion for service by taking an annual Jamaica Missions USA trip with his staff.

During every trip, they hike into the mountains and help dozens of underserved Jamaicans with low-cost dental care. For many, it is the only attention to their teeth these patients receive all year.

Willett and his staff will typically perform up to four tooth extractions per person at a cost of just $2. At the end of a week, they will have extracted at least 500 teeth from those who seek their services.

“You realize you’re really serving the poor,” Willett said. “Some people have a hard time paying their $2.”

Jamaica Missions USA is a faith-based group of medical professionals who provide health care to low-income Jamaicans. Their teams include dental, medical and other health professionals.

A weeklong trip starts with a four-hour flight to Montego Bay, followed by a three-hour bus trip to the base camp where air conditioning and hot water are hit-or-miss. Then they trek for up to two hours into the Jamaican mountains to see their patients.

Most are farmers living in areas scarcely visited by health-related nongovernment organizations. Due to financial hardships and a remote location, they can’t get down the mountain to get regular care.

Libby Grantham, 65, a dental hygienist for Willett, has joined these missions for 25 years. She said she’s thankful Willett has such a passion for service and shares it with everyone in the office.

“We wouldn’t be doing this if he didn’t have a heart for it,” Grantham said. “He works so hard and sees everyone he can. He’s an incredible leader and leads by example.”

Willett became involved with the Jamaican missions in the 1990s on a recommendation from a staff member.

Many of the trips for medical personnel took two weeks, which was too much time away from Willett’s practice. Once he found a trip that lasted one week, he took the chance and tried it. He’s returned with his staff every year since.

Many who take the journey say they become attached to the patients and credit the experience as a catalyst for their own spiritual growth.

Amy Boyd, 57, works at the front desk at Willett Dental Associates and has been on several missions. One year, the group traveled to the Dominican Republic instead of Jamaica after extensive hurricane damage.

Boyd said she forged a bond with a young girl named Midori who became her “brushing assistant,” teaching younger children how to properly brush their teeth.

Midori had been struggling with the absence of her father, Boyd said, which was something she could relate to. Because there was a language barrier, Boyd asked an interpreter to deliver a message from God she wanted to share with the girl.

“I told Midori that I, too, had not known my father growing up, and I carried a lot of pain because of it,” Boyd said. “I told her that as I have come to know the Lord, he has impressed upon me that he is my father. He is your father, too, and he is always with you. It was a moment that blessed me that I’ll never forget.”

Willett said watching people push past uncomfortable feelings and connect with others makes him happy. Service is a core value for Willett. He said he believes he has a religious responsibility to give back to the world.

“You’re so out of your comfort zone,” Willett said. “It pushes you. For a whole week, it’s all about somebody else.”

He says it makes him appreciate all the blessings he has in his life.

“When you’re immersed in another culture and working 8 to 5, all you do is give back all day long … spiritually and physically,” Willett said. “It’s the one time of year I feel like I really serve God, … and my flesh needs that.”

Boyd said she admires his passion and kindness, and he has become a role model in her life.

“He never gets ruffled, angry or unkind, and he does whatever he can to help a situation,” Boyd said. “He always says, ‘You can never out-give God.’”

Willett believes they’re words to live by. “True happiness comes when you are immersed in helping somebody else.”